The campaign aims to help reduce acts of aggression and impulsive violence caused by anger in everyday situations, for example during evenings out, in the workplace, on the commute or online. 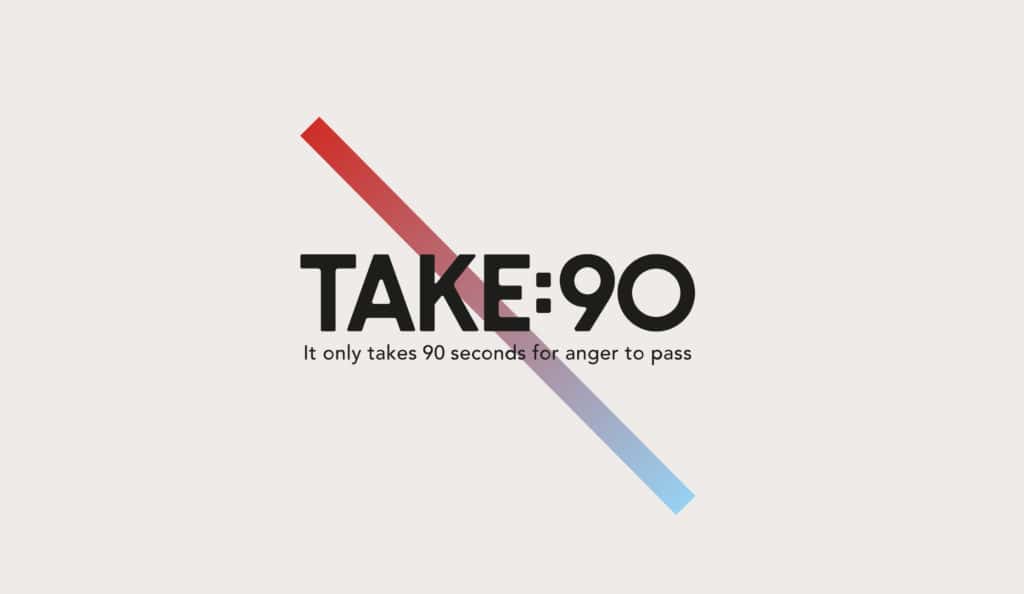 As the largest initiative of its kind reaching organisations and individuals across the UK, the campaign encourages people to think again about seemingly socially acceptable acts of anger as society faces a recent increase in violent crime. After five years of violent crime falling, decreasing from 1.9 million incidences of violence in the year ending March 2011 to 1.2 million in the same period of 2017, it is notable that 2017 saw a 20% increase on the number of police recorded offences in 2016 *.

Some violence has complex and entrenched causes. However, anger in many everyday situations is something that can be de-escalated using a very simple tool. Scientific evidence shows that it takes just 90 seconds for the neurotransmitters that cause anger to flush out of our systems. Through 90 second content including films, meditation, long copy ads and new ‘angrymojis’ for social media, Take:90 hopes to spread the message that 90 seconds is all it takes for anger to pass.

Dr Jill Bolte Taylor, the Neuroanatomist who originally proved that it takes just 90 seconds for anger to pass and is backing Take:90, explains:

“We experience anger when the ‘anger circuit’ in our brain is stimulated. Anger is just a group of cells in our brain that have been triggered and we have the power to choose to act out or not. It only takes 90 seconds for that circuit to settle down.”

Content released especially for Take:90 includes a 90 second rap from MOBO award-winning Guvna B and a 90 second free-to download meditation from the Calm app. For more information on all of the Take:90 content, visit www.take90.co.uk

New research, commissioned for the launch of Take:90 reveals that many young people (60%) didn’t know that 90 seconds is all it takes for feelings of anger to go away.** Interviews with young people, commissioned by Police Now, also highlighted the volume of violent content that they are faced with on social media. One male aged 23 said, “At least a couple of times a month something will be shared that is in some way shocking – often violently shocking”.***

As young people increasingly challenge the normalisation of violence in society, the campaign hopes to make ‘taking 90’ part of our mainstream vocabulary just as the term ‘designated driver’ helped to prevent drink driving.

“Some violence has complex causes, but often violence is caused by people feeling angry and reacting in that first 90 seconds. If we let those moments of anger lead to aggression, whether it’s during an argument with a friend or stranger or getting squashed on the commute, it makes people feel unsafe, unhappy and cross and can use up people’s time and attention in a very negative way. Take:90 is an effective practical tool that we can all use and share with others to help keep our cool – it’s not always easy but it is essential if we are to live happily in a diverse and busy world.”

Almost 90 organisations – from orthodontist Angle House to huge organisations like Next – are coming together to back this campaign – because of the impact aggression can have on their employees, customers, communities and young people.

“Businesses are made of people and they can therefore play a key role in addressing society’s biggest challenges. London First is delighted to get behind the Take:90 campaign and play our part in getting this message out. If we all learnt to count to 90 before responding to something that makes us angry, we could help stop those thousands of incidents that otherwise damage our city’s social fabric.”

For more information on Take:90 or to register your interest as a partner, please visit www.take90.co.uk.

If you are a school, hospital or other public place and you’d like a Take:90 poster that takes 90 seconds to read and can help people to de-escalate their anger then please get in touch via the website.

* Source: Stats from the Crime Survey for England and Wales and police recorded crime

*** Source: interviews conducted by PSB on behalf of Police Now